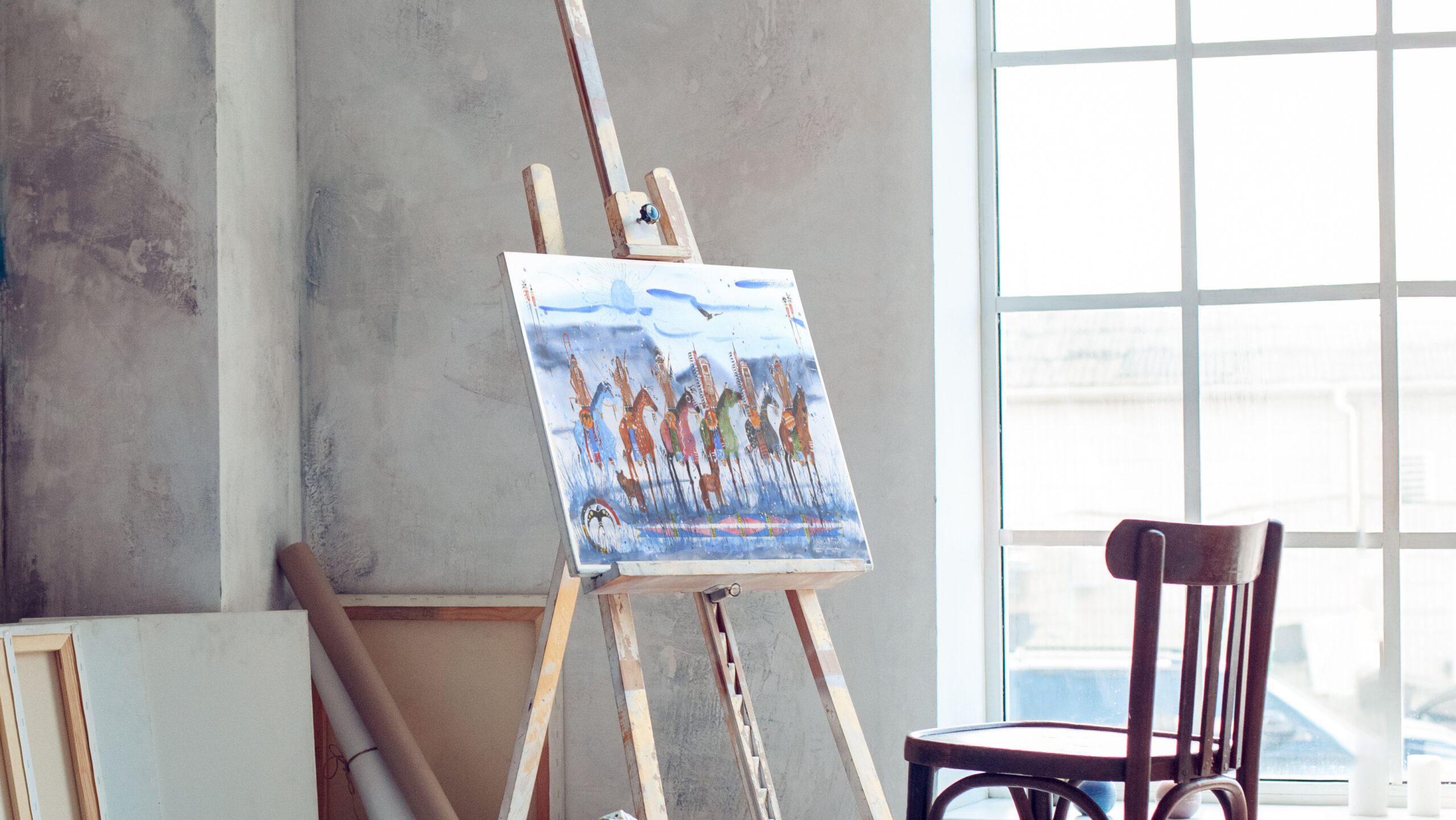 What is one of the first things that comes to mind when you think of Leland Stewart and his works? For me its a combination of passion and visionary. His work gives the onlooker a glimpse into his heritage, into his imagination and into the Crow themselves. They feature various scenes with his iconic long-legged war painted horses and beautiful traditional Native American geometric patterns and painted war shield borders.

Leland is a native Montanan and a member of the Crow Nation, Whistling Water Clan and the High Hawk Society. He has been an avid painter and passionate about portraying his culture and heritage with the brush nearly his entire life dating back to when he attended high school at Saint Labre Indian Mission in Ashland, Montana. His fervor for art drove him to start experimenting with other mediums such as pottery, photography and ceramics when attending and graduating from the Institute of American Indian Arts in New Mexico in 1975.

As he later states in his answers to our Creators and Collectors series questions and when quoted by the Havre Daily News in 2016, “At that time, water color was the most challenging medium to me, so I decided to focus on it.”

When given the chance to view his work in person one is overwhelmed by not just the astounding talent of the hand that produced the piece but also a rich depth of Leland’s life. His works speak to his being raised in the heritage of the Crow, attending sundances, medicine bundle ceremonies and powwows with his grandmother.

A few months ago our North American Auction Co. team came up with this new concept of highlighting some of our staff’s favorite artists, silversmiths, creators. In doing so we also thought of asking several notable collectors their unique perspective on the other side of creating, those that collect it, why they do so etc. When we started to finalize the concept of the Creators & Collectors series the very first person I thought of and the mind I was hoping to learn more about was Leland Stewart.

We have had the honor of marrying Leland’s work with many collectors and adore his work. Luckily when I reached out to Colleen White-Wolf, Leland’s wife, she was so excited for the both of them to participate. Below are the questions and answers from our new Creators & Collectors blog series.

What is your favorite piece you’ve ever made?

The warriors in the front, the city of Billings and the Rimrocks in the background titled “1700’s Warriors Vision of Billings Montana”

What gives you the inspiration to create a piece?

The challenge of watercolors, they are hard to control.

Do you collect anything, such as art, art similar to yours, silverwork, antiques, etc.

I collect ceramics, lithographs and my grandchildren’s paintings.

Who are five creators or artists you admire?

If you could drop everything and start over doing something different, what would you do?

What’s your least favorite part of creating a new painting?

Getting started and trying to think of something to paint.

If you were to make a piece that would be displayed in the White House, what would it be?

If you had advise for another creators what would it be?

Have fun with it and don’t be afraid to mix colors to create something.

What is something you wish you knew starting out?

What advice would you give to a younger generation who might be interested in being a creator?

I have donated watercolor paintings to young people to inspire them to create.

What about advice for a new creator just getting started?

Don’t be afraid to go beyond their imagination.

What notable figure (ie political, celebrity, historic etc.,) would you be most impressed if they owned one of your pieces?

Is there a piece you’ve always wanted to create but haven’t yet?

Yes, it hasn’t come to my mind yet.

Where do you see the Native American Art space in 20 years?

I think it will be more poplar as new Native American artists come out.

What is a different style or medium you wish you could do?

What’s your favorite piece a competitor or similar artist has made and why?

Earl Biss paintings, because of his unique style of Indian paintings.

What is one of your current projects and what excites you about it?

Trying to create 10 pieces at the same time.

Anything you want to add?

“Never give up on your dreams to create.”

We hope you enjoyed the first Creators & Collectors Series. Leland is such an amazing creator and we are honored to partner with him and offer his amazing works to collectors such as you. Below are a few of the links to several pieces listed in our July 31st Sale. We will also have at least two are three listed in our August Sale as Leland is one of our most prominent and favorite artists to share.

Love the series? Want to see more? Have an idea on how to improve or change the blog? We would love if you could subscribe, share or send any ideas you have to us! We would also love if you shared this series on social or just to a friend so that more people can enjoy the work from such a talented man.

Leland Stewart Original Art in our July 31st Sale Below:

Leland Stewart Art Found in our July 31st Sale
Processing…
Success! You're on the list.
Whoops! There was an error and we couldn't process your subscription. Please reload the page and try again.